Every year, millions of fans are eagerly awaiting the start of the new football season in America. At the beginning of September it is time again, the NFL starts in a new series and more and more German fans can inspire for the Pillenhatz. If you want to play football on television, away from the late broadcasting times, you can now make yourself comfortable again in front of the home console. With Madden NFL 18 Electronic Arts starts in the new generation sports games. But are the changes compared to the 2017er version noticeable, worth a new purchase for owners of older versions. We plunged into the fray with the Green Bay Packers. 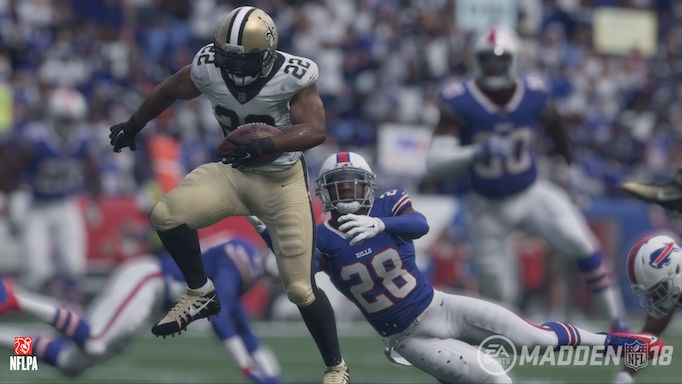 At the beginning, the high beginner-friendliness immediately stands out. Fundamentally, the mechanisms of the sport are well explained even for newcomers and despite consistent English language and text output, you can quickly find your way in the tidy menus.

In addition to the well-known modes: Career, Quickplay and Ultimate Team is now, as already known from the Fifa offshoot 2017, a story mode to choose from. Here, the player accompanies the college star Devin Wade on his way to the super ball in a visually stunning graphic environment. The player receives in addition to detailed game tips and a comprehensive insight behind the scenes of the million dollar sport with all the associated ups and downs. Every playful decision and every result has a direct effect on the development of our exceptional talent. The mode titled "Longshot" is quite short, but knows to inspire and makes you want to continue in the coming year. So an absolute asset to the Madden series.

The gameplay itself has changed very little. Veterans control quickly, only the level of difficulty was something filed. Thus, it has now become more difficult to place long passes with the teammate and also the expansive running games are now slowed down much more likely by the opposing defense. We find it good, as successes like a touchdown or just the saving Fieldgoal have to be worked out harder and the selection of the moves has to be more in the focus of their own considerations.

Graphically, Electronic Arts, based on the Frostbite Engine, has taken a bang out of it, the stadiums are even more alive, and the facial features of the players and caregivers on the edge are almost frighteningly realistic.

Madden NFL 18 has once again succeeded. The new story mode significantly upgrades the football simulation. An in-depth tutorial is also the perfect time for newbies to plunge into the world of American football. The point deduction is because technically and playfully nothing has improved significantly. Innovations have been taken from FIFA and the gameplay has now been a few years under its belt. Nevertheless, EA`s sports game starter 2017 remains an absolutely interesting and time-consuming living room variant of the sport American Football.

If you want to buy excellent players in MUT mode after the release of Madden 18, you can choose buy cheap Madden 18 coins for sale on u4gm.com. You won't want to miss them.

The story in MU Legend can be seen as a continuation of MU Online as you will be playing a warrior of the holy war against the Kundun Lord. The beginning of the game helps you get familiar with the controls and play style of your character when max.